Ripley’s Believe It Or Not: Democratic Assembly candidate Michael Blake didn’t vote for @BarackObama in 2012. In an effort to verify Mr. Blake’s voter history in the District of Columbia (DC), I contacted Brenda Gardner at the Voter Registrar’s office at the DC Board of Elections and Ethics. Ms. Gardner emailed an official digital copy of Mr. Blake’s voter profile from 2010-2014.
To my surprise, I discovered that Blake’s voter history did not include voting in the November 2012 General Election for his boss, President Obama. At the time, Obama was seeking re-election in a tight race against GOP-standard bearer Mitt Romney. And one would think that a key Obama For America operative would cast a vote in-person or by absentee ballot.
Nope!
Apparently, Mr. Blake was too busy encouraging others to do so than to cast a vote himself for the re-election of America’s first black President.

But even more startling was finding that Blake had failed to vote in any election in the District of Columbia. He initially registered to vote in DC in November 2010 from an address at 460 L Street NW.
In October 2012, Blake re-registered from 1221 Masschusetts Avenue NW. That’s the same address he noted on his New York City Board of Election (BOE) voter registration form as where he last voted before transferring his enrollment to a Bronx address in June 2013. 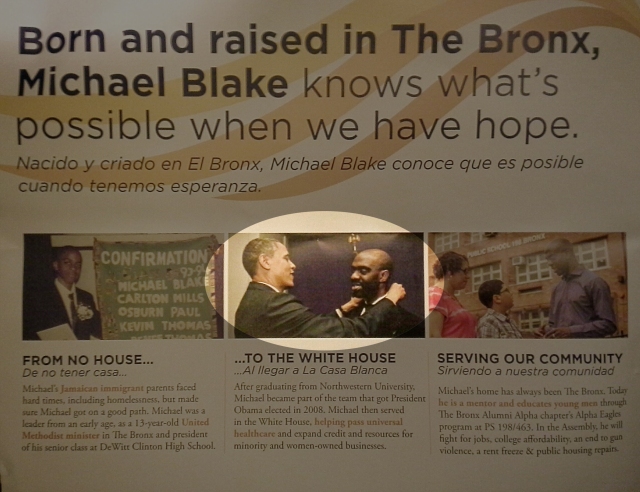 As unbelievable as it appears, Blake missed the 2010 DC General Election, a special election in 2011, a recall vote, and a city council and presidential primary election in 2012. And prior to registering in the Bronx, Blake skipped out on an at-large special election.
Now, Michael Blake wants Bronx voters in the 79 AD to vote for him.
One local resident I spoke with shook her head in disbelief. “I’m not so sure about him now,” she said.
I daresay, she’s not alone in that assessment.
Michael Benjamin is a columnist and blogger as well as a former state legislator who represented the 79 AD, 2003-2010.

Can Christians Vote for A Mormon (or A non-Evangelical Christian)?