That’s my warning to those who might support former Bronx Borough President and White House urban czar Adolfo Carrión Jr. for mayor in the 2013 race.

In the aftermath of Hurricane Sandy, voters want a mayor who will focus not only on holding down crime and fixing our public schools but also on re-engineering our physical city.

And into the breach steps Carrión to offer his expertise. His emergence as newly “disenrolled” Democrat threatens to turn the mayoral contest into “The Hunger Games.”

A former pastor, an urban planner by training, a politician by design and a liberal by inclination, Carrión says he’ll “soon” make up his mind on a mayoral run, presumably as a Republican-Independence “fusion” candidate — an alternative to the liberal “machine” Democrats.

I’ve known him a long time: I managed his successful 1997 bid for a City Council seat, then worked as his legislative director for two years.

His spokesman extols Carrión as an alternative to the special interests as well as someone who can focus on rebuilding and reuniting all five boroughs.

But he has a long road ahead of him as he seeks to convince Republican and Independence Party leaders that an ex-aide to President Obama can be a centrist candidate for mayor of New York.

Will a new “suit” separate him from the pack?

His actual planning experience was limited to stints in the Department of City Planning and as district manager at Bronx Community Board 5.

And the $1.1 million in his campaign war chest pales in comparison to the hundreds of millions and successful signature business that Michael Bloomberg brought along when he ran as a “fusion” candidate back in 2001.

To succeed, Carrión would have to present the most sensible and feasible plan for modernizing our infrastructure, rezoning flood-prone areas and rebuilding where necessary.

Carrión expects developers, general contractors and construction trade unions to gravitate toward him because he supported many large projects in The Bronx.

But is Adolfo the right person to say, “Grifters and grafters need not apply”? While he was in public office, his campaign coffers werereplete with special-interest contributionsfrom PACs, landlords, developers and municipal unions. (In fact, unproved “play-to-pay” allegations arose during his vetting for his White House post.)

For years now, The Bronx has seemed to produce more federal inmates than successful candidates for higher elected office. Political scientist Mitchell Moss has dubbed the borough “a political graveyard” for those with citywide ambitions because its leaders have little experience working across ethnic and class divides.

Many of Adolfo’s past supporters are disappointed that his early political promise did not yield a real legislative record during his time on the City Council or signature accomplishments as borough president.

By all accounts, his tenure as the urban planning czar in the White House and as HUD regional director was unremarkable.

If local Republican leaders buy Carrión’s latest “road to Damascus” transformation, they deserve to be cast into the political wilderness for the next 40 years.

Gov. Andrew Cuomo is right to resist running on the Cuomo name if he runs for president 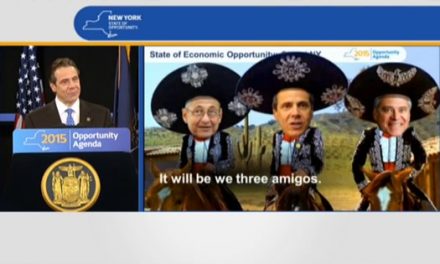