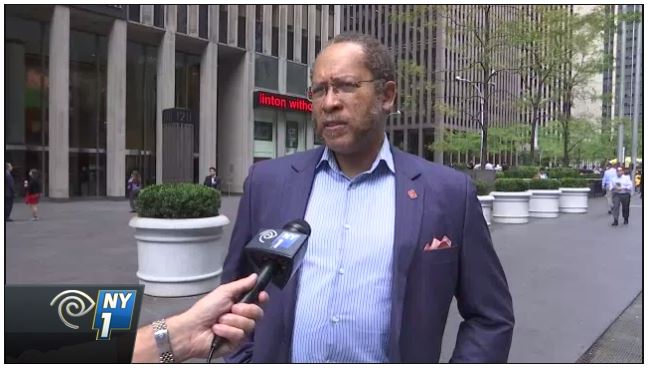 On Monday, I was also interviewed by NY1 Albany reporter Zack Fink in a preview of Tuesday’s primaries. [http://www.ny1.com/nyc/all-boroughs/politics/2016/09/12/primary-elections-held-for-albany-lawmakers-in-all-five-boroughs-tuesday.html] While the presidential election has taken up most of the political oxygen in the room, tomorrow is primary day in New York for legislative races. Several incumbents are facing primary challenges in districts that are heavily Democratic, meaning whoever wins the primary will likely emerge victorious in November. And as state House Reporter Zack Fink points out, there are also five open seats here in the city.

One of the most closely watched races in State politics is for the open seat being vacated by State Senator Adriano Espaillat who is running for Congress. The 31st District covers part of Upper Manhattan but also runs down the borough’s west side.

Four candidates are running for the seat including former City Councilman Robert Jackson, Micah Lasher, a former aide to Attorney General Eric Schneiderman, activist Luis Tejada and Espaillat’s hand-chosen candidate Marisol Alcantara who has received financial support from the breakaway faction of Democrats in the state senate, the IDC, who have an alliance with Republicans.

“Makes it very interesting to see what happens,” said Michael Benjamin an Associate Editorial Page Editor with the New York Post. “I know the IDC wants to maintain a separate caucus. They want to have a say, they want to be kingmakers. And she could allow them to do that.” [00:35]

The race is also on in the district of former Assembly Speaker Sheldon Silver in Lower Manhattan who had held the 65th Assembly seat for 40 years before being convicted of federal corruption late last year. Six candidates are running in the primary including Alice Cancel, who has ties to Silver and won the seat in a special election back in April.

Some believe the specter of Silver looms large in this race.

“There are those who have a great deal of loyalty to him,” Benjamin said. “But I’m not quite sure about the support for Alice Cancel. The reports I hear are that she has been invisible in that district.” [01:05]

And on Staten Island we find the only Republican Primary in the City. Incumbent Ron Castorina Jr. is being challenged by Janine Materna who recently accused Castorina of getting arrested years ago, and having the records expunged. She offered no proof for this allegation, and some Republican leaders have called on Materna to drop out of the race.

Unlike the Senate where the outcome in November will likely determine who controls the Senate, the Assembly is expected to stay under Democratic control no matter what the outcome.

The Week That Was – TW2 Minority Review

Bronx DA Still Has 86AD In His Sights